El Goodo – By Order of the Moose

Welsh psych-pop band El Goodo return with their long, long awaited third album By Order Of The Moose, due out on Cian Ciaran’s (Super Furry Animals) Strangetown Records. Recorded over the course of 8 years in an old derelict cinema in their home village of Resolven, the album is a continuation of where the band left off in 2009 with their previous effort Coyote. Wielding the wide open spaces of spaghetti westerns with the close melodic harmonies of girl groups and the good humour of Nuggets inspired garage rock’n’roll, El Goodo takes you on a trip through their fascination with 60s music.

Comprised of brothers Elliott (drums, percussion) and Jason Jones (guitar, vocals), Pixy Jones (guitar, vocals, keyboards), Lewie Sewers (guitar), Matthew Young (keyboards) and Andrew Cann (bass), El Goodo (named after a Big Star song) are a band enthralled by the past. They recorded the album on a 16-track with a small collection of faulty equipment, creating a collection of melodic pop songs, embellished with strings, brass, sitars, harmonicas, xylophones and vocal harmonies (and then seemingly covered it all with dust), that you’d expect to find on some forgotten 60s record that someone has stumbled upon in their attic.

Elliott saw the words “Loyal Order Of Moose” carved into stone on the side of a building in Neath and they all liked the sound of it for the album title. They changed it slightly to By Order Of The Moose. As Pixy explains; “I’ve always thought of it as “The Moose” is some evil guy who wears a moose head hat and controls people’s minds, making them do evil things. In reality though it means nothing, we just liked the way it sounded.” Jason, who made the intricate cover illustration, seems to have interpreted the title to be more of a circus, depicting a Wild West ringmaster, wild animals and acrobats.

From the first recording in November 2008 with the track “When”, the album took eight years to complete. Initially thinking it would only take them a few months, they set out to record at The Music Box in Cardiff. Two years later they decamped back to their village, to the Resolven Miners’ Welfare Hall.

The first single “It Makes Me Wonder” is their interpretation of a 60s girl group song. Pixy describes bringing the song to the band; “On the demo I sampled the drums intro of “Be My Baby” by the Ronettes. Matty commented that the drums sounded good, how did I get that sound? I told him that I played it in the kitchen on various saucepans and he believed me.”

The similarly titled opening track “I Sit & Wonder” was an attempt to do something like Zager & Evans’ “In The Year 2525”, but it didn’t turn out like that. The lyrics were based on war films like Come And See, Ivan’s Childhood and Red Dawn. “So It Goes” was meant to be like a Marty Robbins cowboy song but ended up being more like a Nuggets track. “Susan and Bill” is a touching tribute to his parents.

For those curious as to why an album would take quite so long, the song “It’s All Over” gives some insight in to the band’s mood for the last song that they recorded. It was during a low-ebb in band relations and is about the band splitting up, which thankfully never happened. Pixy says; “When I recorded the vocals, Matty made a rare appearance at the studio and kept spoiling perfectly good takes by laughing out loud at the Viz Annual that he was reading. He was also trying to rehearse potential harmonies (which were all out of tune) while I was in the middle of recording a take. I had to repeatedly tell him to “shut the fuck up, I’m recording here” and I eventually had to ask him if he could please go and get me some orange squash so that I could quickly finish the vocal in peace while he was gone. A fitting end to the troubled and lengthy recording process!”

Despite the sheer length of time and the difficulties encountered, with By Order of The Moose El Goodo have achieved something extraordinary. The album is fully realised, cohesive and demonstrates the band’s incredible knack for catchy hooks, eloquent songwriting and terrific arrangements. By taking an odyssey through the music of the past, they have shaped a sound that is both timeless and points towards a promising future. 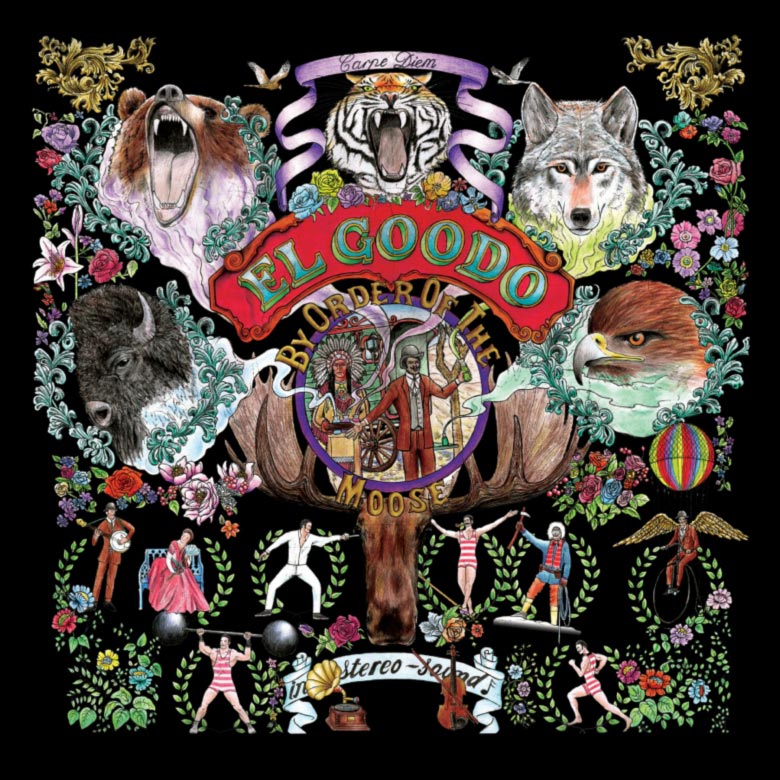